Indians, especially the North Indians are quite prone to kidney stone formations due to dry and hot weather – Dr. Vivek Venkat, Urologic Oncologist, and Robotic Surgeon 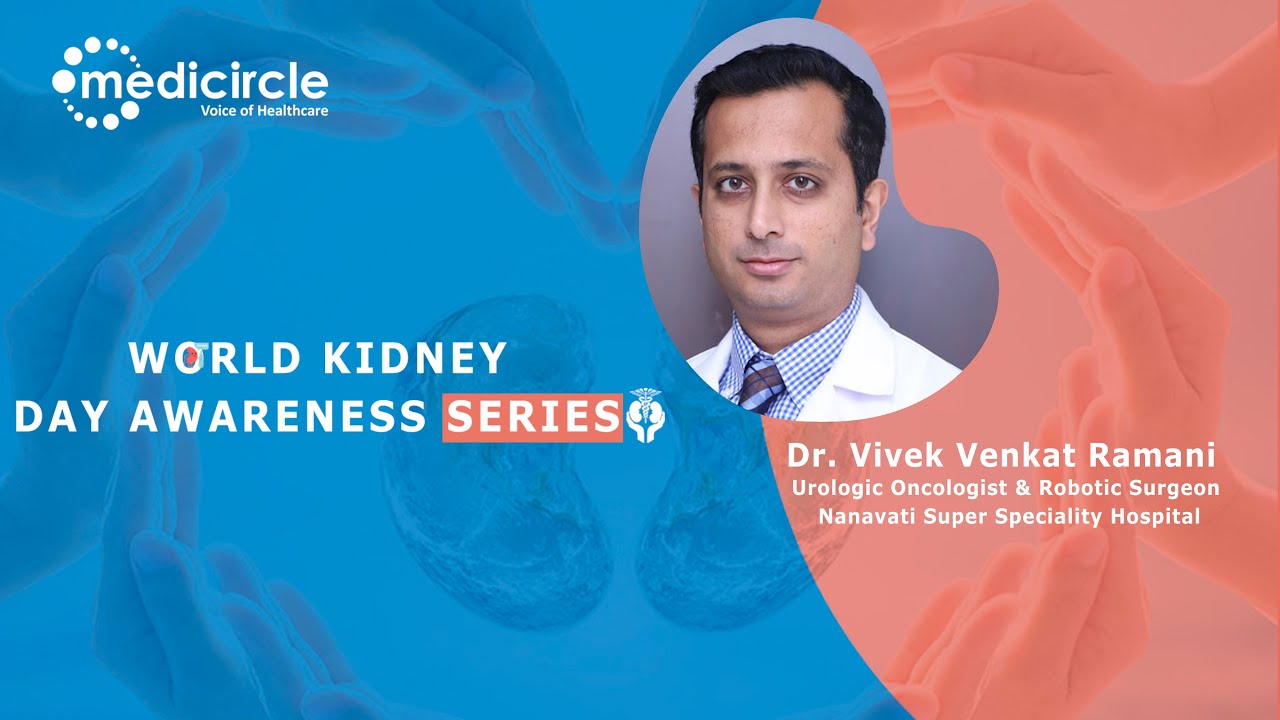 Since a large number of the Indian population is affected by kidney stones, India falls in what is known as the stone belt of the world says, Dr. Vivek Venkat, Urologic Oncologist, and Robotic Surgeon.

Chronic kidney disease is a progressive condition in which kidneys don't work properly as they should to filter waste toxins and fluids from our body. This can cause serious health problems. Recognition of chronic kidney disease could slow progression, prevent complications and reduce cardiovascular-related outcomes. Medicircle is conducting the World Kidney Disease awareness series featuring eminent nephrologists and urologists from different healthcare organizations to get their views on maintaining good kidney health.

Dr. Vivek Venkat is a Consultant, Urologic Oncologist and Robotic Surgeon at Nanavati Super Speciality Hospital. He is a US fellowship-trained Urologic Oncologist and Robotic surgeon from the University of Miami. Post MBBS, he pursued MS in General Surgery and MCh in Urology (gold-medalist). He has extensive experience in managing malignancies of the genito-urinary system including prostate, kidney, urinary bladder, testes, etc. He also has vast experience in robotic surgery. He was part of the randomized open versus robotic cystectomy (RAZOR) trial which was the world's first multicenter randomized trial comparing open to robotic surgery for any organ site (Lancet, 2018). His research interests are focal therapy and newer detection/ screening methods for prostate cancer, outcomes, and cost-effectiveness of robotic surgery.

Dr. Venkat explains, “Several diseases can affect the kidney. So being a urologist, the most common one that I see are kidney stones. A large number of populations is affected by it and India falls in what is called the stone belt of the world because of the dry and hot climate. We, especially in North India are quite prone to the formation of kidney stones. So that is one of the most common kidney diseases that we see. When a patient has kidney stones, they may develop pain in the flank, which is the region below the ribs at the back. So, whether it's the right kidney or the left kidney, either can be affected. As symptoms there may be vomiting, there may be fever, if there's an infection associated then there may be a difficulty in passing urine when the kidney stones start to come down towards the bladder. These are the common signs and symptoms of kidney stone disease. A lot of times people might have even passed stones in the past and they wouldn't have even noticed. Sometimes small stones pass with a little bit of blood and this can recur quite commonly,” says Dr. Venkat.

Dr. Venkat emphasizes, “Sometimes if the kidney stones grow very large, or especially if they are on both sides, then they may lead to kidney failure as well. So, it's important to remain carefully on surveillance every year or two, or if you have pain then immediately seek medical assistance, get an ultrasound, or something like that to diagnose what exactly is going on, because if we catch it very early, it's an extremely treatable illness. So, don't allow it to fester and keep growing inside for a long time because that can cause more trouble,” says Dr. Venkat.

Dr. Venkat advises, “If there is blood in the urine, it's something that can never be neglected. Almost 10% of patients with blood in the urine will have some tumors somewhere in their urinary system, whether it's the kidney or the bladder. So today, luckily, we have ultrasound, CT scans, even in small villages. Lot of times we see kidney tumors very early nowadays. This is a very good development because, in that situation, we can just remove the tumor and leave the rest of the kidney intact. And especially with so much diabetes and blood pressure in India, the amount of kidney that is preserved can be maximized in these patients. In the past, we used to get big lumps with tumors, blood in the urine, and often if there used to be cancer, it used to spread also. This phenomenon is becoming rarer today. Blood in the urine is an important warning sign,” says Dr. Venkat.

Dr. Venkat explains, “Whenever the kidneys don't function, the toxins and excess fluid in the body cannot be eliminated well. This manifests sometimes with swelling of the feet, where the water connects in the feet. If it collects in the lungs, there may be difficulty breathing, you may get puffiness around the eyes, especially early in the morning, which may be the sign of kidney disease, may not be failure yet, but early kidney disease. Apart from the blood in the urine, reduction in the urine output, breathlessness, fluid accumulating in the lung, too much urea or toxins in the body, sensorium, or the mental status of the patient can change. So, these are all the signs and unfortunately later signs. So, for all those who have blood pressure and diabetes, their kidney functions should be checked very regularly. They should be in touch with a nephrologist or a physician who is monitoring that,” says Dr. Venkat.

Diabetes directly affects the kidney in many ways

Dr. Venkat mentions, “Kidney failure, unfortunately, is growing more and more rampant in India, especially lately. The main reason for that is diabetes. India is considered the diabetes capital of the whole world. So, there is something with genetically predisposes Indians to diabetes, especially those who are long-standing diabetics and who are not well controlled, there is a high risk that their kidneys will slowly deteriorate because diabetes directly affects the kidneys in multiple ways. So, it may be vascular, it may be a direct deposition of some toxins in the kidney and things like that. So over time, a lot of these kidney diabetic patients will have some deficiencies in their kidney function. So that's why very close monitoring with the endocrinologist or physician is required. Early referral to the nephrologist for whatever is needed from a diabetes point of view is very important,” advises Dr. Venkat.

Hypertension, obesity, and other risk factors

Dr. Venkat explains, “Hypertension is risky. Vascular changes in the blood vessels of the kidneys and can lead to kidney failure. These are rampant especially in those who are above 50 or 60 years of age. Nowadays, unfortunately, with stress, we are seeing younger and younger people with hypertension and diabetes. So, these are the main factors again, as we discussed. Kidney stones are very common. Obesity is another thing that is also increasing which puts an increased load on the kidney and it also predisposes to diabetes and blood pressure. So, these are some of the things that we should keep an eye on,” says Dr. Venkat.

Dr. Venkat advises, “Do not drink more water than required. 2-3 liters of water are recommended for most people. Those who are working outside and sweating a lot may need some extra fluid. Oftentimes, you get messages on social media about how much water to drink. Some people say they drink 5-6 liters of water. These things are not going to work. Drink a moderate amount of water which is enough to flush out whatever is there. But if you are going to drink too much water that itself can cause trouble. So firstly, you will all the time be passing urine in the bathroom. And second is the electrolytes in the body that can get over diluted, especially in the elderly, the sodium levels come down, and this itself can cause a lot of problems. So about three liters are a good ballpark figure for all people. There are some cardiac conditions or kidney diseases when your fluid has to be restricted so that you don't overload the body. So be careful about two to three liters as standard. If you have any cardiac or kidney disease, please check with the doctor about how much you are allowed to drink,” says Dr. Venkat.

Dr. Venkat advises, “Reduce salt and sugar intake. This is good for everybody. Salt contributes to blood pressure. So, a salt reduction is always a good idea to maintain normal blood pressure. And again, sugar reduction especially in those who are diabetic is good. Follow the national slogan of “Ek Chutki Kam” in both. So, whether it's salt or sugar, try to reduce it a little bit and that will help in both ways in blood pressure as well as diabetes.”

Dr. Venkat says, “Those who already have some kidney disease, need to avoid high protein food and red meat. Too much protein can also be difficult for the kidneys to filter. So the normal protein requirement is about .8 to 1 gram per kg. So, if you are 60 kilos, you need to take about 50 to 60 grams of protein. Beyond that, it is not needed unless you are doing some physical exercise or in bodybuilding or something like that. So moderate protein intake, and of course, control the sugars well, and anything good for the heart is good for the kidneys.”

Dr. Venkat suggests, “High vegetable and fruit diet, reduction in red meat, adequate fluids, and reduction in salt and, and sugar reduces obesity. If you are obese, try to lose some weight that will help with the load on the kidneys and also controlling the other risk factors for kidney disease. If you have kidney stones, then sometimes we can analyze the type of stone and see the food you may need to avoid to reduce that risk of kidney stones coming back. So, these are the things that we can do to help us prevent our kidneys from failing and keeping them healthy,” advises Dr. Venkat.