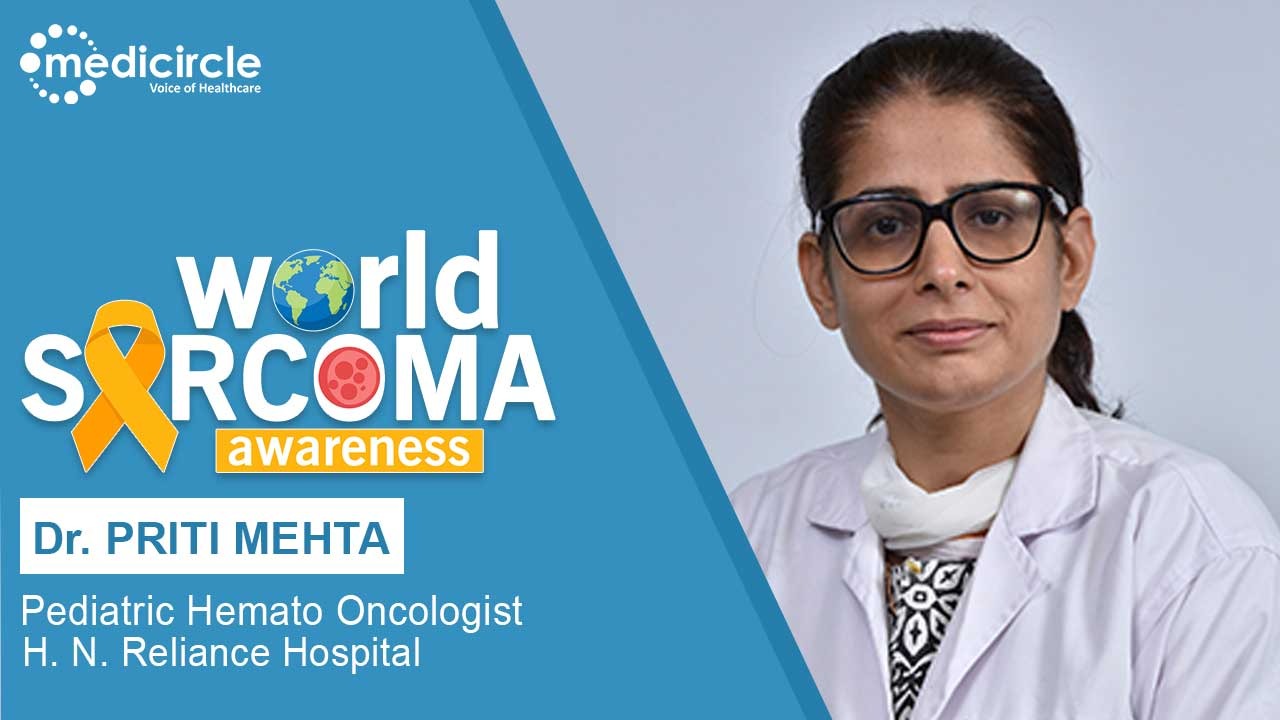 "There is no direct correlation between obesity and sarcoma but is there with age. Soft tissue sarcoma is mostly seen in children and teenagers. Early detection helps in controlling its spread to other parts of the body," Dr. Priti Mehta, H. N. Reliance Hospital

Sarcoma is the general term for a broad group of cancers that begin in the bones and the soft tissues. Bone sarcomas are rare tumors approximating 0.2% of all cancers. Soft tissue sarcoma forms in the tissues that connect, support, and surround other body structures. This includes muscle, fat, blood vessels, nerves, tendons, and the lining of the joints. It has an average of 2.1% of the frequency range in males and 1.2% in females. As sarcoma awareness days are absorbed every year on July 21, we at Medicircle are conducting an exclusive series to raise awareness about this rare medical condition.

Dr. Priti Mehta is Pediatric Hemato Oncologist. She has a rich experience of 21 years and is attached to H. N. Reliance Hospital, Saifee Hospital, Prince Aly Khan Hospital, and Holy Family Hospital. She has expertise in treating Benign hematological problems, Haemophilia, Sickle cell anemia, ITP, Leukaemia, and Lymphoma up to 18 years of age.

Dr. Priti says, "There is no direct correlation between obesity and sarcoma. However, obesity itself invites a lot many problems of health. Hence, we should avoid childhood obesity as much as possible.”

Dr. Priti informs, “Soft tissue sarcoma is generally muscle sarcoma that has two peaks, first it is mostly seen in 2-6 years of age and second in teenagers that is 15-19 years of age. There is a direct relationship between age and sarcoma. Bone sarcoma or osteosarcoma is mostly seen in teenagers. If any child is complaining of muscle pain or bone pain that is out of proportion, then parents should not ignore this and should immediately consult a doctor. Because in this age group bone or muscle sarcoma are highly manifested. Fibrosarcoma is generally seen in infants and other sarcomas are found in later life."

Dr. Priti emphasizes, “If a child is consistently complaining of pain in a particular area for many days, then parents should not ignore that symptom. They should get it tested or X-ray for further examination. Sarcoma generally affects limbs and internal organs.”

If any individual has any organ anomalies like CNS defects, cardiac disorders.

Environmental factors also play a role. If parents have a habit of substance abuse then their children are more susceptible to sarcoma.

If a teenager has undergone radiation or any chemo medicines, this increases the chances of osteosarcoma in them."

Dr. Priti expresses, "If it is detected in early stage, stage 1 and 2 then the prognosis is much better by use of chemotherapy, radiation, and surgery. But if it has been spread to other parts, then prognosis decreases and becomes hard to treat. Early diagnosis is always better. Hence, if anyone is going through any muscle pain, formation of a lump, or bone pain for no reason, get tested and treated as early as possible."