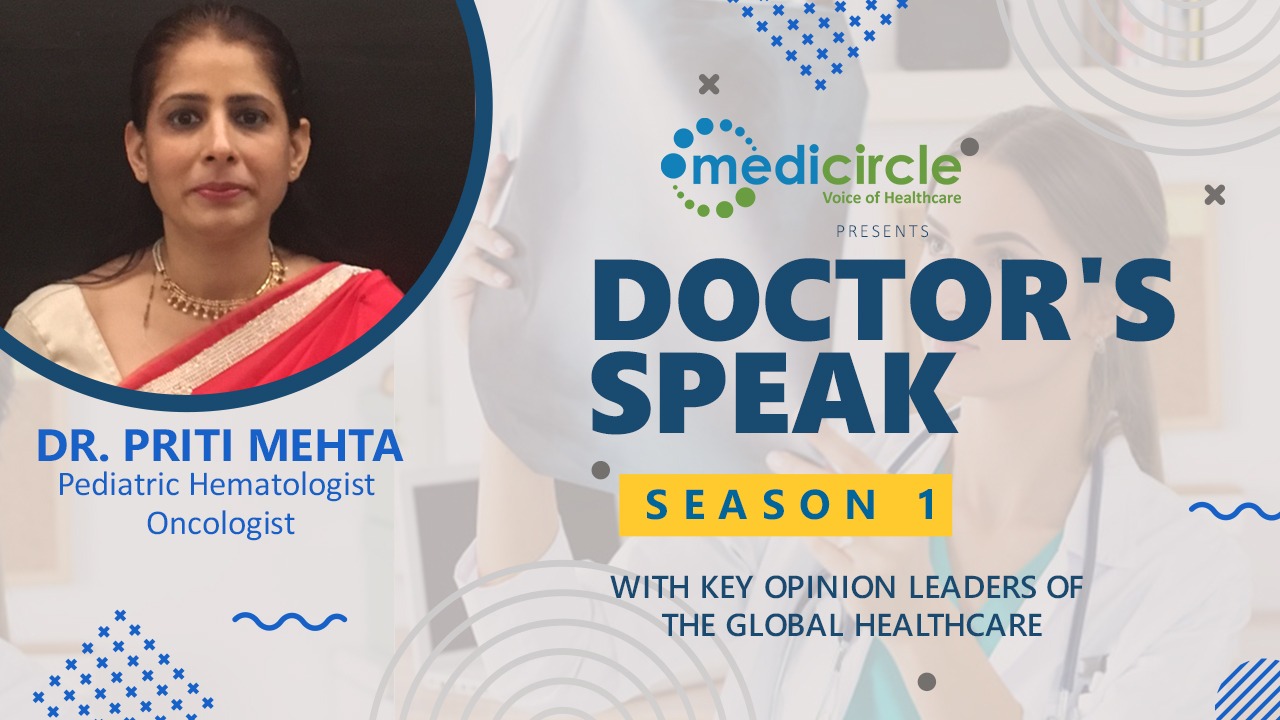 “The causative factors which are responsible for having higher numbers of thalassemic children born every year are lack of awareness, illiteracy, and ignorance,” says Dr. Priti Mehta, Pediatric hematologist Oncologist.

A hematologist-oncologist is a physician who specializes in the diagnosis, treatment, and/or prevention of blood diseases and cancers such as iron-deficiency anemia, hemophilia, sickle-cell disease, leukemia, and lymphoma. This physician is trained in hematology, the study of blood and oncology, the study of cancer.

Dr. Priti Mehta is a Pediatric hematologist Oncologist, with an experience of 17 years in pediatric hematology-oncology, and she is attached to HN Reliance Hospital, Saifee Hospital, Prince Aly Khan, and Holy Family hospitals. She is an expert in treating benign hematologic disorders like aplastic anemia, sickle cell anemia, solid tumors like hepatoblastoma, neuroblastoma, and leukemia lymphomas up to 18 years of age.

Lack of awareness, illiteracy, and ignorance

Dr. Priti sheds light on the topic that there are close to 2 million people suffering from thalassemia in India and estimates suggest that more than 10,000 children are born every year who suffer from this disease, “Lack of awareness is definitely there amongst our population, illiteracy, ignorance adds to it. But apart from that, there are many other causative factors that are also responsible for having higher numbers of thalassemic children born every year. So, as we know that there are some certain religious beliefs also amongst people, that once you are carrying a thalassemic child, you cannot undergo termination of pregnancy and that is happening because the antenatal screening is not well developed in our country. Also, there is a stigma of having conditions like thalassemia trait, which people don't want to disclose because they feel that it's a social stigma to confess that there is some disease in my body, though it's not significant, it has an impact for the future generations, which people don't understand. So there is a social stigma attached to not labeling oneself as a thalassemia minor, the attitude of not coming up with the social stigma, the attitude of not getting screened. For this, there is a complete lack of awareness. So all these contribute to having an increased number of thalassemic children in the society,” she says.

Dr. Priti explains in brief about the use of pre-implantation genetic diagnosis, “It's one of the innovations of medicine, which is like a double-edged sword because it is a boon than a disaster which has been in India since the last two decades. To begin with, it was first at Jaslok which had started with the pre-implantation genetic diagnosis and followed we have a few centers across India. But there are limitations with every new thing that comes into the market. The first limitation is:

The cost - Not every average Indian is able to afford the cost of this because it is as close to 6000 US dollars, though the cost may have subsidized a little over the years but not really.  Requires a lot of expertise - so it cannot be available in the rural places of the country and we cannot set up those facilities in those centers because it requires a lot of expertise to have the pre-implantation genetic diagnosis.  The other problem is that if there is a mosaic embryo, then it will not be picked up in the pre-implantation procedure and then after the fertilization, it will not be picked up and so there is still a chance that so we need to do chorionic villus sampling or amniocentesis even after doing a pre-implantation genetic diagnosis.

So, for a country like ours, where the population is completely divided between the rich and the poor, it is definitely an option for the elite. But for the poor section of the society, antenatal screening is still the best option compared to pre-implantation,” she says.

Dr. Priti talks about her experience, “I did not enter this profession by choice. It was after my MD pediatrics that I joined Bhatia children’s hospital as an assistant professor and I was asked to look after children with lung diseases and cancers and that's where my journey started. When I worked with these children, I realized that the agony and misery that they go through is tremendous. But the gratifying thing is that once they get all right, and they unite with the families completely hale and hearty, it is such a satisfying experience. So that made me get involved more with this branch and in 2007, for the first time in our country, a DNB fellowship in pediatric hematology-oncology had started. So I decided to go for it and do the two-year fellowship where I was one of the first three in the country to do it. It gives me tremendous satisfaction to see children getting alright, also, the second thing is that childhood cancer is curable. Most of the time the common notion is that it may unless it's in the very advanced stage, but now with aggressive chemotherapy and a multi-modality approach, even that is possible. So I just treated a stage four, neuroblastoma patient, with multi-prong therapy, and by God's grace, he is doing very well and it's been more than a year now since he's been treated. So such things really give you a satisfying experience, that you are doing something which is helping the society and the future generation,” she says.