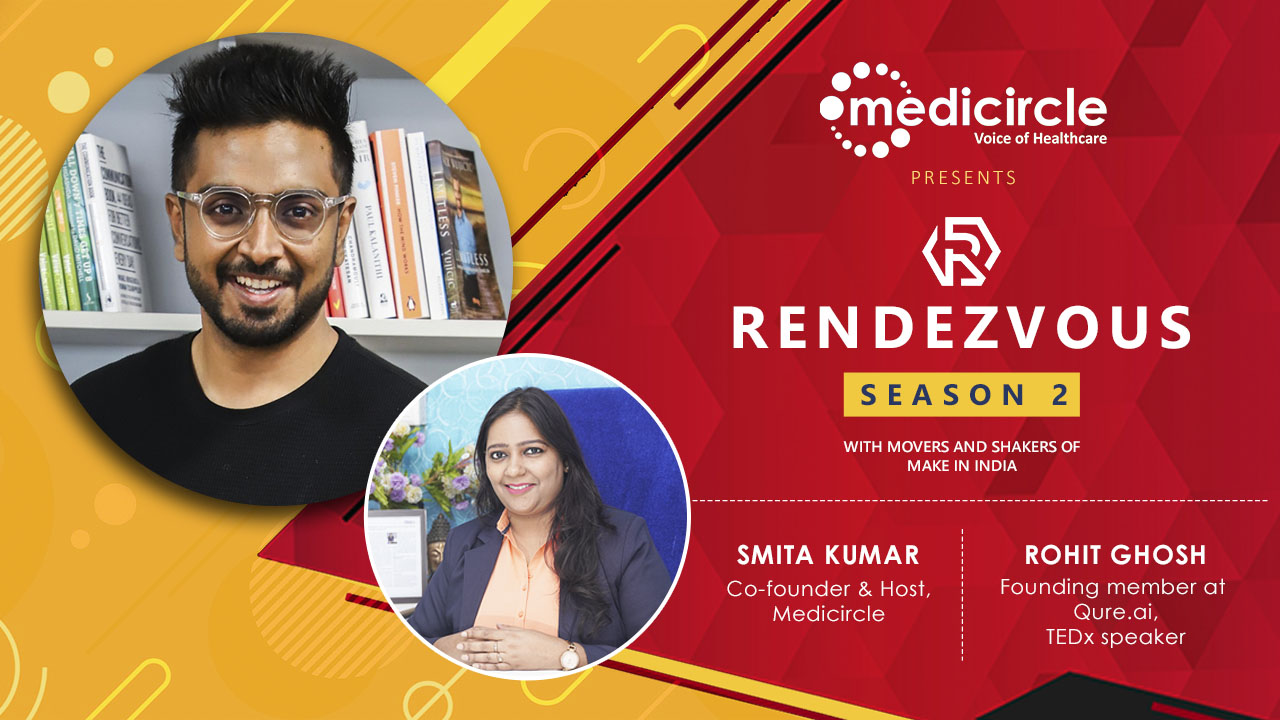 “Whether you are based in Mumbai or a remote tribal village in Madhya Pradesh, ideally the quality of care should be exactly same and continuous and this is something that AI has been able to pull off already,” Rohit says, on Artificial Intelligence (AI) being the key in ensuring that healthcare practitioners can focus on cases that truly matter, letting machines diagnose or treat the easier ones.

Artificial intelligence is now being used in healthcare as it simplifies the lives of patients, doctors, and hospital administrators by performing tasks that are typically done by humans, but in less time, less error, and at a fraction of the cost.

Artificial intelligence (AI) refers to the simulation of human intelligence in machines that are programmed to think like humans and mimic their actions. The term may also be applied to any machine that exhibits traits associated with a human mind such as learning and problem-solving.

Rohit Ghosh, Founding Member of Qure.ai is currently responsible for business development and strategy within Qure for particular geographies. He has previously worked as an AI Scientist and was deeply involved in building R&D products in the computer vision area. He has 15 + publications in multiple journals like JAHA, ACR, Clinical Cardiology, and conference proceedings including the most coveted on The Lancet on the application of AI for non-contrast head CT scans.

Healthcare more affordable and accessible through the power of Artificial Intelligence

Rohit throws light on the subject, “A few days back, an interesting article was posted which mentioned that most advanced algorithms for artificial intelligence are actually deployed in the wealthiest of the countries but in the most rural and poorest parts of India. And that is to the reference to the work that Qure.ai has been doing primarily for COVID-19. So with the advent of COVID-19, obviously the purpose is to provide solutions to help Governments, hospitals to tackle COVID. While we started deploying in the places like Milan, Italy, UK, Mexico, and at home that is Bombay Municipal Corporation (BMC), other municipal authorities across India but after a point, we started realizing that the values of the AI software can deliver is lot more in places which are extremely native and rural. Like for example, Mission hospitals in Bihar, Madhya Pradesh, Chhattisgarh, Assam, 200 bedded tribal hospitals, small hospitals like wherein you have to travel 60 km just to reach the nearest care hospitals, basically the places where healthcare has not reached yet. Those are the places we have been able to use AI to help patients out and that is the place where we do not have doctors and physicians to help out the patients. From that perspective, this is the most burning example of how AI is actually making healthcare accessible in the most difficult parts of the world that do not have physicians cause that is where technology has a huge role to play,” he says.

Future for AI in India

Rohit sheds light on the role of the future of artificial intelligence in India, “The luxury healthcare in India is only available in Tier 1 cities as compared to Tier 2 and Tier 3 cities. If one is living in Tier 4 or Tier 5 areas which are the rural areas, they do not have access to healthcare. So I believe AI has a huge role to play in terms of not only increasing the accessibility but also making it a level fee for all patients in the rural parts of India. Whether you are based in Mumbai or a remote tribal village in Madhya Pradesh, ideally the quality of care should be exactly the same and continuous. This is something AI has been able to pull off already where we are standing in 2020, otherwise, it would have had taken probably 2 – 3 more years to happen if not for COVID. And I think, that is the role AI has to play in the next coming years in India. Obviously, we are a huge population and we do not have enough people to support us so AI can make healthcare completely standardized. AI does not need more infrastructures as it replicates easily and that way we can make quality healthcare available at each and every part of our country,” he says.

The biggest value that a mentor can bring in

Rohit explains why he enjoyed being a counselor while mentoring more than being a consultant and cheerleading, “I have played different roles at different stages of life. Primarily I would pick the role of Counselor and that is because cheerleading is easy and it is obviously very helpful especially when in difficult situations cheering on or motivating can help someone and I am talking facts since I have experience of mentoring a lot of students. When you can actively cheer and actually help in bringing in the solid structure and making people see what maybe they are unable to see by themselves, which is the biggest value that a mentor can bring in. As a counselor you can dig deeper and pick up things which might not be seemingly evident to the mentee and that is why I think I like that part of mentoring the most,” he says.

“It was one of the momentous occasions, we all have grown up listening to TED talks and I think TEDx is a huge platform where you get inspired from. For me as a fact to talk on the stage was one of the momentous occasion but now looking back at that journey and looking back at that occasion, I think sharing the stories of Qure and how Qure is actually helping the healthcare was a big opportunity to share with the world and I truly am grateful to the TEDx team locally and abroad. But the biggest take away for me from this was getting the opportunity to interact with fellow TEDx people. Some of them have done way more than what I have done in my life, so exchanging ideas and understanding things from their perspective in person and developing a personal bond is the biggest take away for me. It is much less to do with the speech that I gave and more to do with the kind of people I got to meet and share ideas with,” Rohit says.

Rohit explains why he isn’t feeling pressured due to COVID, “I look at it more as calm and not the pressure maybe cause the way I have seen the healthcare industry, going back to 80’there was AIDS then tuberculosis has been there for many years, chickenpox, Ebola, SARS have also been on the same lines as that of COVID. So I think each decade has seen its own pandemic and epidemic and now with the breakout of COVID I believe that with each disruption there is a new normal that emerges. But I do not feel pressured with it as with the new normal people start living their lives and it very quickly becomes a part of your life and so we see people abiding by social distancing and wearing masks."

"I clearly remember that I was in Singapore in mid of February when it was the peak of COVID in Singapore and people were wearing masks and maintaining hygiene and I thought to myself that if COVID ever happened in India, I never thought it would be a reality, I feared that with a huge population like ours, it would be difficult for the people to cope with it but the other day I went out and I realized that it is almost 6 – 7 months since people have been under lockdown and yet people are adhering to it to a great extent. I really think that the extent to which people are adhering to protocols in India is way higher than what people were doing in Singapore way back in February. So that perspective, it is just a way of life. It is not any pressure, people will adapt to the ways of living with the new normal and God forbid but if something else happens in the future, another new normal will emerge from there and people will learn to live with it rather than taking any additional stress,” he says.